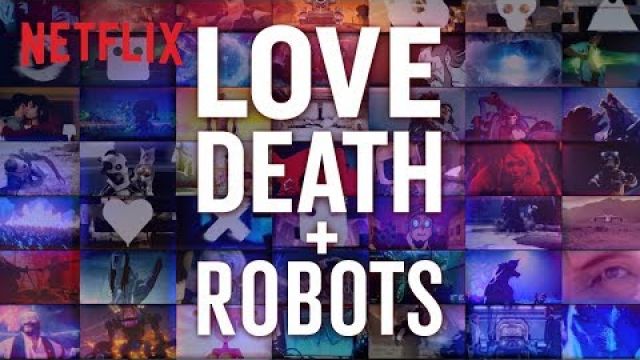 Below are my thoughts on every episode in Season 1 of Love Death + Robots as categorized into three parts: Bad, Good and Great.

Netflix has been doing a lot in terms of excusing their subscription model by using the money to grow an actual platform for videos rather than simply host a bunch of movies. Although they’ve had a number of hit exclusive series and a whole lot of really, really garbage quality things with their name on it, they’ve really made a name for themselves with me personally as a leader in throwing money at the wall and seeing what sticks.

Their newest venture features something somewhat new for the Netflix platform in general; self-proclaimed “NSFW Animated Anthology” Love Death + Robots is a collection of different short stories animated in a variety of different ways by a variety of different studios and artists around fantastical and horrific science fiction based things. I’ve compared it to some other properties like The Animatrix, Black Mirror or even Heavy Metal (for those old enough to remember that last one) but it’s a bit hard to generalize as all of the 18 episodes in the series vastly differ in qualities they offer.

That’s where this list comes in. Below are my thoughts on every episode in Season 1 of Love Death + Robots as categorized into three parts: Bad, Good and Great.

What I considered “Bad” are episodes that just didn’t hit a mark with me; they either were unappealing in atmosphere, fell flat in tone or just felt rushed and uninspired. “Good” are episodes that I enjoyed or I felt did a few particular things well but I don’t feel really stood out in some way special. “Great” episodes felt like they had a very clear intention, hit their marks well and generally had an interesting premise or well-realized message.

Episode 5 – Sucker of Souls
I really wanted to put this in “The Good” category but the subject matter and some neat parts of animation weren’t enough to make me want to revisit this at any other time in my life. It isn’t the worst of this category but it’s so easily forgettable that I can’t put it in league with some of the stuff I really, really enjoyed.

Episode 6 – When the Yogurt Took Over
I can see why people would like this. It’s punchy, short and has a very Douglas Adams feel to it, following a silly premise to a strange ending. I just think it’s lame. At least it’s short.

Episode 9 – The Dump
I love how this episode looked but the content wasn’t enough to keep my interest since the “twist” was obvious right from the get-go. It’s fun enough in the way it gets to the obvious conclusion but I wasn’t engaged enough to really care about it. I feel like where it sits (after 2 of the best episodes in the series) hurt it a lot and, although it’s somewhat of a palate cleanser episode, it might’ve been better served earlier in the series.

Episode 10 – Shape-Shifters
It’s fine if you want to see some brutal werewolf fight. If not, it’s totally skippable. Army dudes being army dudes and a cliche revenge plot but at least some of the animation is neat and brutal.

Episode 12 – Fish Night
A beautiful episode that feels like when you would do your homework the night before it was due but were given a month to complete it. Real animation talent that falls flat to a lame, abrupt ending and lackluster concept.

Episode 13 – Lucky 13
I think of all the episodes that try to take on a photo-realistic style, this one falls the most flat visually from me. The way the characters move in their facial features and how the environments look remind me of CGI from Final Fantasy: The Spirits Within era. A somewhat sweet ending but I was snoring through most of this one. Maybe the real ship was the friend we made along the way.

Episode 17 – Alternate Histories
I’m just bored of the whole “what if Hitler was killed before WWII” schtick. I don’t care at all about revisionist history stories and, even though this takes a silly, comical approach to the matter I found it a waste of time.

Episode 18 – The Secret War
Probably the best looking of the photo-realistic CGI style of all them, but easily one of the more boring and trope-filled ones. This plays out like a bunch of cutscenes from a video game with the parts that you get to play being cut-out between sequences. Kind of a disappointing end to a strong start.

Episode 2 – Three Robots
This was just a cute little story of three robot buddies hanging out in a post-apocalyptic Earth, reminiscing about humanity and some of our quirks. I really like the trope of robots trying to understand humanity by knowing things they’d find strange that we do so this was an easy sell for me. Also, it has cats and I love cats.

Episode 4 – Suits
This episode really scratches that Starcraft itch of a bunch of normal, everyday farmers having to suit up into giant weaponized mechsuits to fight an invading force of bug-like aliens. Nothing too original or groundbreaking about this one but it’s just really fun to watch this mini action sci-fi movie play out. The ending is a cute nod to the “who is the REAL monster” trope which was neat.

Episode 15 – Blindspot
It may not do anything revolutionary in the way of story telling but this is just a good heist episode with robots and some awesome visuals. It doesn’t overstay its welcome and is all around just a fun time.

Episode 16 – Ice Age
I’ll be the first to admit that the fact that this episode was live-action gave it a stark enough contrast to the rest of the series that it (probably unfairly) stood out more than it likely really deserves. That being said, I really like the simple concept of a miniature civilization’s rise and fall from grace taking place in a normal couple’s freezer. If anything, it seems like kind of a waste to hire actual actors for so little necessary acting.

Episode 1 – Sonnie’s Edge
I struggled at first where to put this episode. On further watching of the series, the inaugural offering lacks a lot of what I grew to love in the series so at first I had it in the “good” category but upon reflection have decided that it deserves to be here. There are nicer looking episodes, ones with better stories and have a better overall message or attempt a statement but Sonnie’s Edge sets the perfect tone for the series.

Episode 3 – The Witness
While the two episodes before The Witness are a good “jumping on” point to showcase what one can expect from the series, this was the first stand-out episode in terms of look, feel and interesting twist that raises my expectations from the rest of the series. Where it falls flat is the use of what feels like just gratuitous sexuality for no reason or benefit to the story, making a good few minutes of it just… awkward.

Episode 8 – Good Hunting
This is the one episode I really, really would love to see a full movie or small series take on. Set in a steampunk version of an English colonized Hong Kong, it’s a shame that there isn’t enough time in these small stories to really flesh out the amazing ideas that start with a medieval Chinese landscape full of folklore demons and spirits, the move to a modernized future and a full revenge plot all in one.

Episode 11 – Helping Hand
Space is scary. Being stuck in space floating forever until you choke is scary. This does that idea well and ends on a brutally bittersweet note showcasing the drive one can possess to survive.

Episode 14 – Zima Blue
Probably the best story to really take on the idea of what it means to be alive or “human”. Amazing art style, great ending… maybe a bit pretentious for some people but this is the type of philosophical, sentimental bullcrap I love.