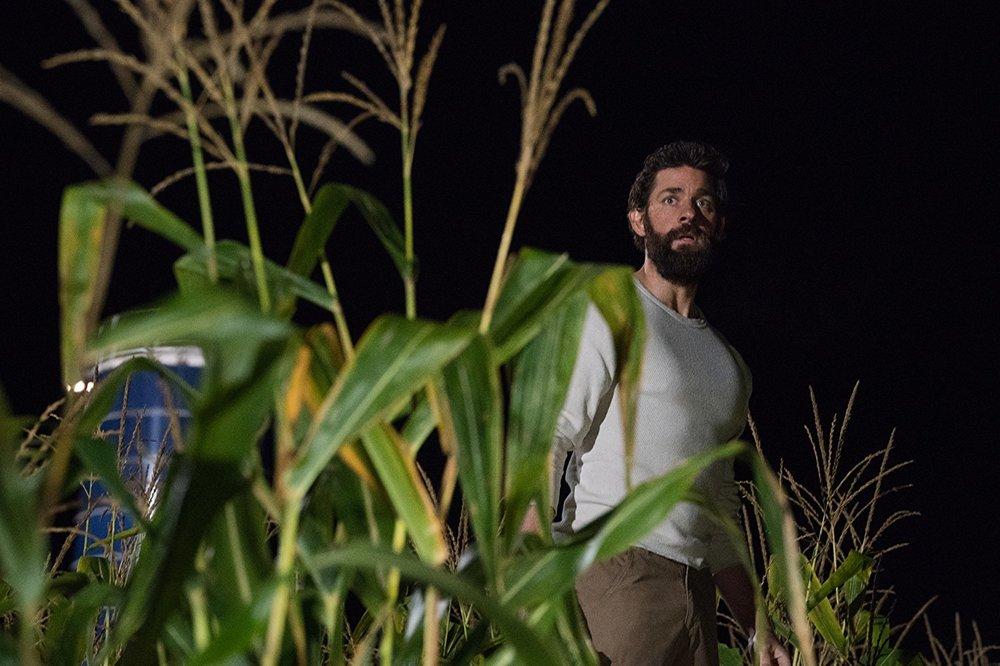 A Quiet Place sure is a movie. It’ s competently made, but it’s not one I was particularly fond of.

The basic idea is that a single family is living on a farm where the vast majority of civilization has been wiped out by monstrous creatures driven by sound. So the characters mostly communicate through sign language; one character in particular (Millicent Simmonds) is deaf, wearing a hearing aide that doesn’t really help.

Man, I’m not sure where to start with this movie because I have so many nitpicks and quibbles. Overall it’s ok. It’s fine. It’s competent. But I ultimately I didn’t really enjoy it. Better than A Wrinkle in Time, not as good as Maze Runner: The Death Cure.

My biggest issue is that the movie doesn’t do a good job of holding tension. The way the rules are so clearly defined, means that there’s no mystery to these monsters, so there’s nothing surprising. From the jump the characters already know how to avoid these monsters. There are newspapers in the abandoned town with the headline “IT’S SOUND!” which makes total sense because printing and shipping newspapers is a super quiet process but whatever. It just doesn’t serve well as a horror movie or thriller.

I also don’t find the monster design particularly compelling or creepy. They spend so much effort letting you know these things have giant ears. I just don’t find ears scary.

This is more of a family drama that happens to have monsters than a horror movie. Which would be OK, except that I think the drama is really bad. It’s a good thing the characters don’t talk more, because every time they do it’s really bad.

The thrust of the emotional narrative ends up coming from the death of one of the kids early on in the movie. And the strain this puts on the relationship between John Kransinki’s character and his daughter (The deaf girl played by Millicent Simmonds). The big problem with this is how its framed; namely that it makes the classic “this story was definitely written by a dude” of only being interested in the girl’s story as it relates to her Dad. Instead of it being about her blaming herself for the death of her brother (which the movie established she does), the thrust of the arc focuses on her thinking her dad doesn’t love her. It’s bad and it’s way less interesting than if she could have had her own arc.

This movie has the idea for one good action scene in it, which is also just the scene with the kids in the car being attacked by the T-Rex from Jurassic Park. But y,know with hearing instead of sight. This is a fine structure for a scene. Unfortunately the movie ends up being this scene over and over again and I just got bored of it. That’s not totally far; in this part Emily Blunt is in a tub but in that part the kids are in a grain silo.

This isn’t a slasher movie with a body count, it’s a straight faced drama. So it’s more like a bloated action movie. It’s not poorly made, but honestly this is one of those cases where it probably would have been better (for me) if it had been worse.

The movie it actually reminds me of is M. Night Shyamalan’s Signs. I don’t like Signs, it’s mostly just boring, but the thing it really has over A Quiet Place is how fucking nuts it is and how weird all the characters are. This family in A Quiet Place is just so normal and boring. They have no depth, no quirks; they barely exist beyond function. So even though I would say this is a more competent movie, it’s way less interesting and it’s not something that’s going to stick with me.

Also for a movie all about sound, the soundtrack and sound design are pretty bad. Lots of jump scare stingers.

I have lots of other nitpicks, but ultimately they don’t matter. If the character drama were better, if the horror… existed, or if there were any tension or I cared at all, none of those minor issues would mater. Like, I recently saw Annihilation which had a monster that blows these creatures out of the water, that doesn’t really change my opinion on A Quiet Place, it just doesn’t help.

A Quiet Place didn’t make me mad, it’s fine, but I don’t think it’s memorable or interesting. I just got bored watching it.