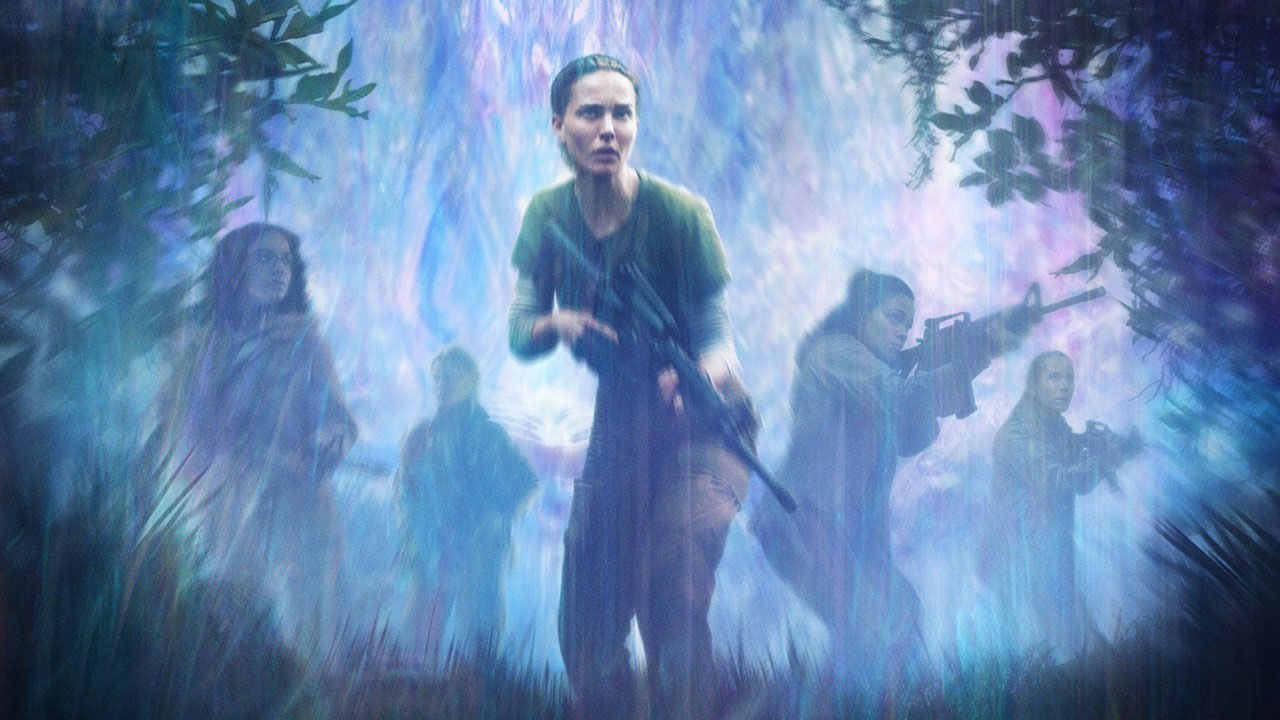 Annihilation comes from writer/director Alex Garland whose previous film Ex Machina I had some issues with but was clearly well made. As a writer though he’s written other movies I’ve loved (28 Days Later, Dredd) and Ex Machina was good enough to get me interested in his latest film. Although the trailer for Annihilation is very bad; it’s a bad trailer that makes the movie look bad and does a bad job of getting across what the movie is at all.

So let’s start there: what is Annihilation?

Well it’s based on a book (that I’ve learned from talking with my friend who has read it) it has basically nothing to do with. What it actually is is a movie in the long line of movies trying to be like 2001: A Space Odyssey. That first contact with aliens that actually feel alien. Like most of the imitators it’s a much more conventional film than that implies; there are no long musical interludes.

Put another way, Annihilation is like “What if Arrival were good?”

I’ll talk about the plot momentarily but first I want to say that I think the story here is actually the weakest part of the film. Movies are a collection of pictures and sounds, and it’s the pictures and sounds here that stand out. This is a very pretty movie with some amazing shots and sequences and the score really helps emphasize the oppressive mood. This is a film about mood and atmosphere in a very visceral way. I don’t really care about the story or characters but I was also never bored.

This is a hard science fiction movie, with frankly way too much explanation, which can be a hard sell for me unless you really nail it, and Annihilation gets there. A lot of that has to do with how it embraces the violence and horror of the situation. And not like in a slasher fun way, in a disturbing way that doesn’t shy away from gore. A character gets her face ripped off and you see it; a man gets gutted and you see everything.

The setup of this film is basically that something crashed near a lighthouse in a low population swamp and created this dome called the Shimmer. Over the years its existed many soldiers and drones have been sent in, but nothing has ever come out. Not a single signal or transmission. And the Shimmer is growing. Our main heroine, played by Natalie Portman, is a former soldier and biology professor whose husband, also a soldier and played by Oscar Isaac disappeared a year ago and then suddenly shows up at their house acting strange and having basically no memory of what happened and also he’s dying. When the military shows to pick him up Portman gets taken too and roped into this whole thing, eventually volunteering on the next mission to go into the Shimmer.

I won’t go farther than that into what’s really going on, but I will say that I think the film spends way too much time explaining the science of what’s going on.

This is also the kind of movie where I can see myself really being annoyed by certain kinds of positive reviews of it. Basically anyone who tries to dive deep into the “ideas” of this movie. To me that stuff is way less interesting and kind of secondary to why the movie works. I think this is a great collection of pictures and sounds but I don’t know that they add up to anything more than that. This is the kind of movie that people like to jerk themselves off with and to me it’s just an entertaining movie. It’s not mind blowing, but it’s very good and I think people should see it.